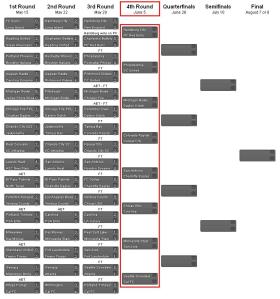 US Open Cup Round Four is set to kick off tonight, and there are quite a few marque match-ups taking place. (Click the picture to see the whole bracket with all the 4th round games as well as results from previous rounds).

Here is the list of games, game times, and video feeds (if available) for tonight:

All these games are sure to offer some good viewing. Philly and DC try to add fuel to the I-95 rivalry fire in a tournament situation. Colorado traveling to KC is a repeat of last year’s MLS Quarterfinal Playoff series. But I think the real games to watch are the ones pitting David versus Goliath. Prediction:  Philly 0:2 DC; Colorado 1:2 SKC

After knocking off the 2011 MLS Champs, Carolina Railhawks look to scalp the Galaxy’s stable-mates in Chivas USA. The additions of Danny Califf, Juan Agudelo, and Jose Erick Correa could prove to be the stalwarts that are needed to stay in the tournament. Carolina will get a sure boost from being at home. Prediction:  Chivas 0:1 Carolina

Will Thierry Henry make an appearance in Hershey when they take on Harrisburg City? HCI’s coming off a dramatic shootout win against a fairly dangerous New England side, so this one is sure to be a nail-biter, too. Prediction:  NY 2:3 Harrisburg

Dayton will be traveling up to Michigan’s warehouse stadium to play indoors. This venue proved difficult for the Chicago Fire last week. Balls constantly hit the roof in the arena, and the same could be true again tonight. Dayton is also still nursing an extreme losing record in league play, not having won any so far. Michigan, on the other hand, is dominating their division in the PDL leagues. This should prove to be quite the fight. Prediction: Dayton 1:3 Michigan

San Antonio was able to squeak out a win on a PK against Houston last week, and they’ll get another chance this week versus a lower division side. Home field advantage seems to be working for San An this year, and their regular season record so far is good for third in NASL. Charlotte is still winless in league play, but having upset FC Dallas in the third round in Frisco, they can’t be underestimated. Prediction:  Charlotte 0:1 San Antonio

Minnesota proved they’re the real deal at Rio Tinto Stadium, with a 3-1 win against a lethargic RSL team. Do they have enough defensive support to handle the onslaught that is surely to oppose them in San Jose? The Quakes have stumbled a bit as of late the past couple weeks, but the heroics of their strikers have eeked out victories, too. The Stars have proven that they don’t need to be playing at home to get wins in USOC play, and they’ve still only lost one game since October of 2011. Prediction:  Minnesota 3:2 San Jose (AET)

The lone wolf of the lower divisions, Cal FC look for another giant to kill. And they’ve found them in the Seattle Sounders, winners of the last three consecutive US Open Cup’s. Playing in Tukwilla will surely be a test for Cal as Seattle is undefeated there in the past few years in this tournament. Eric Wynalda is hoping this exposure will help his players to showcase their talents and possibly make it into the higher divisions. Being televised on Fox Soccer Channel is definitely a good way for an amateur club to do just that. Prediction:  Cal FC 2:1 Seattle

I feel a couple more upsets coming this round, but no where near as many as round three. MLS will definitely dominate the lower leagues, and I can’t help but think that one will win the tournament as a whole. I also can’t fathom anyone rooting against Cal FC in this tournament. The true underdogs of American soccer are gathering support, and a knock off of the USOC titan in Seattle would bode well for the club. Tonight should prove to be entertaining and memorable.

UPDATE @ 2:23PM ET:  I’ve amended some of my predictions because I’ve had some second thoughts.

Help others to Exit:

1 Response to Round Four… Fight!