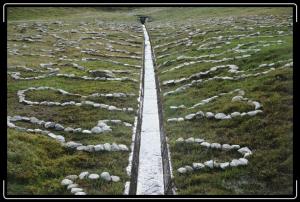 Anyone with an elementary understanding of basic geometry will know that the shortest path between two points is a straight line. But often life takes us to Point B via an uncertain and often non-sensical way.

This is the way my latest fever of Wanderlust has taken.

Our trip to Salt Lake City in August was originally planned for the 17th thru the 26th. After much planning, it was decided that we’d drop the Treelings off in Chicago to spend time with family in Wisconsin and proceed to fly to SLC via Chicago-Midland. Evidently, there was not enough planning involved on our part, as we came to the conclusion that the added expense of driving to and flying out of Chicago was just too much to justify. Additional angst was inserted when we found that all those reward points for staying at a hotel for a month and a half (to which a Beat Recital piece might suffice some day) were virtually useless to use on an airline ticket. This results in us footing the whole bill for airfare, something we just can’t afford to do.

Now choosing to fly out of Harrisburg, Baltimore, or Philadelphia, we also chose to have the kids spend time in Pennsylvania instead. Plans were arranged with friends and family to account for this. This started looking like they were headed back on track again. But waiting a couple additional months to purchase those aforementioned airline tickets didn’t help, as airfare rose by roughly $100  per person in that amount of time. Suffice it to say, we started questioning whether this was actually financially feasible or not.

Late last night, we decided to revisit the trip once again, this time saying we would purchase our tickets and get everything squared away. We checked a half dozen airlines from three different airports, transit to and from two of those cities, public transit from the point the former transit arrives at to the airport, total prices for all, total time taken, macro time schedule for coordination, and the relative stress level of the two individuals involved… and then we calculated a much simpler equation — total distance and cost of fuel. 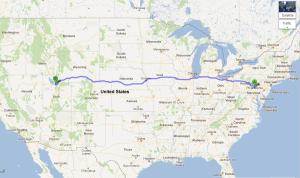 The result was that it’s cheaper to drive two of us over 4000 miles round trip than it is to pay for a one-way flight for one person. My wife was the one that proposed the idea of driving after we did the math. And, to be honest, I had my reservations. I had to sit and think for a few minutes why I was acting so opposedly towards the idea of driving, but no reasoning came to mind. The benefit of not going with our original plan of flying is that the kids still get to spend time with family they don’t see too often, and Lisa and I get another chance for a cross-country trek… this time without being pregnant or daunted by an imposing friend like the two previous renditions. Nebraska is still bound to be boring, and traffic in Chicago is still bound to suck. But two days in a car together does wonders for a marriage. Realizing all of this, I forsook my inhibition of sticking to some engrained plan I had in my head and let it all go. Driving is how we’re going to get to SLC.

Ironically, this entire situation flies (pun intended… or maybe not) in the face of what we have made our historical first choice in driving. As we’ve only actually flown together once before, instead usually opting for road trips and ground-based adventures. Why we chose to fly in the first place now mystifies me, as it’s not something we would really choose in any other situation. I suppose we are naturally inclined to drive; naturally inclined to take a direct path to our intended point. But all this meandering in planning and thinking just to get us back to what we’re naturally inclined to do is maybe a bit paradoxical. After all, even a meandering river takes the most direct path available to it:  down hill.

Help others to Exit: